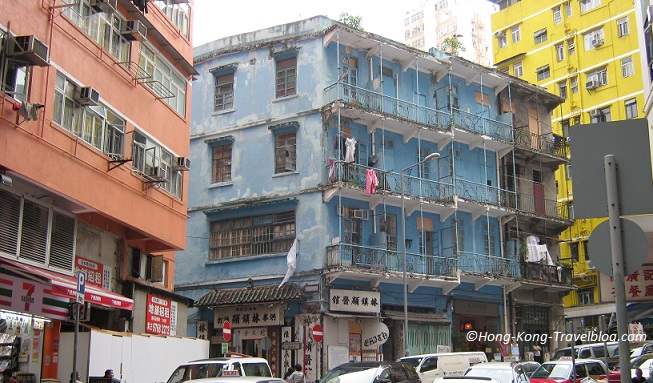 Blue House Hong Kong is the oldest existing tenement buildings in town characterized by its bright blue outer walls. Built in the 1920s, it is located in Stone Nullah Lane, Wan Chai. A blend of Chinese and Western architectural style, this 4-storey building is also one of the few remaining examples of tenement buildings with balconies in Hong Kong. Therefore, Blue House Wan Chai is listed as Hong Kong’s Grade I historic building.

Why is it called Blue House Hong Kong

It said that when the Hong Kong Government renovated the Blue House years ago, the painters only had blue paint on hands at that time. Then, the building facades were painted in blue and hence the name.

The original site of the building was a 2-storey hospital called, ‘Wah To Hospital’. After the closure of the hospital in 1886, the building was then used as a temple for Wah To, the revered ancient Chinese physician.

In early 1920s, the building was demolished and was turned into the current 4-storey tenement blocks in mid 1920s. The ground floor remained the Wah To Temple. In the 1950s, the building became a martial arts school managed by Lam Cho, the nephew of Lam Sai Wing (one of the followers of Kung Fu Master, Wong Fei Hung). In the 1960s, the son of Lam Cho turned the building into an osteopathy clinic.

The second and third floors of the Blue House once housed two schools which offered free education for children in the neighborhood. One of the schools was the only English school in the district in the pre-WWII period.

In fact, Wanchai Blue House Cluster consists of three buildings, the Blue House, the Yellow house and the Orange House. All of them are 4-storey tenement buildings in Lingnan style. The stairs, beams and window frames are made of wood, while the balconies are constructed of reinforced concrete, which are very special in Hong Kong. Even more unexpected was that the nearly century-old house, although without flush toilets, still had residents dwell in them! Not until recently, some flush toilets were installed.