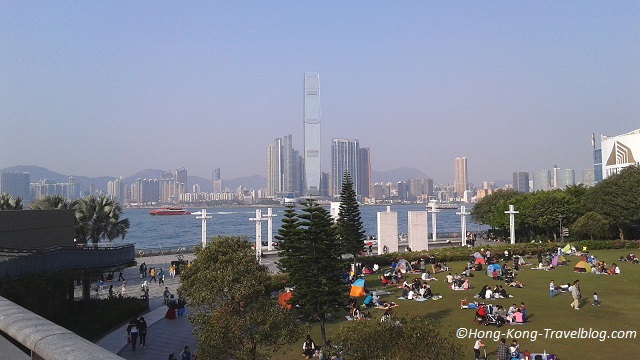 Have you thought of relaxing on a lawn with Victoria Harbour right in front of you? Sun Yat Sen Memorial Park Hong Kong is a new waterfront park in Hong Kong with a lawn providing you with that view! I suddenly think of surf and turf in a literal sense. I’m just kidding, let’s talk about the Park. It is the first and “the only park in Hong Kong named for a Chinese historic figure”. While relaxing yourselves in the Park and enjoying the stunning views of Victoria Harbour, you can also pay respects to the Father of Modern China, Sun Yat Sen.

Where is the Park? Is it a new park in Hong Kong?

Sun Yat Sen Memorial Park is located on the waterfront of Sai Ying Pun on Hong Kong Island, near to exit of the Western Harbour Tunnel. Can’t imagine there is a large lawn, isn’t it? Well, the lawn is considered as large in Hong Kong. Of course, we cannot compare it with the Great Lawn in Central Park.

Guess what? The Park was originally known as Western Park in the 1990s. The area was newly reclaimed for the construction of the Western Harbour Crossing. It was idle for years until the building of the Park. In 2002, the Park was renamed as Sun Yat Sen Memorial Park.

The Park was closed from 2008 to 2010 for re-construction. The whole project was completed in early 2011 and the Park was then re-opened. Western Park Stadium was renamed Sun Yat Sen Memorial Park Sports Centre.

Sun Yat-sen had close relationship with Hong Kong, he received secondary and tertiary education in Hong Kong. In 1892, Sun graduated from the Hong Kong College of Medicine for Chinese (now The University of Hong Kong), where he nurtured his revolutionary thought and activities.

The Park was built in homage to Dr. Sun who devoted his life to overthrowing China’s last imperial dynasty, the Qing dynasty, and establishing the Republic of China (ROC). According to historical records, Sun was persecuted by the Qing government and was later deported by the British Hong Kong colonial government due to initiating revolutions. Thereafter, when Sun Yat-sen passed by Hong Kong, he could only met with his comrades and supporters on boats at the current location of Sun Yat Sen Memorial Park. Therefore, the Park is named after Dr. Sun in commemoration of his contributions to Modern China. If you are interested in learning more about him, you can visit the Dr Sun Yat-sen Museum on the Mid-Levels above Central.

Sun Yat Sen Memorial Park covers an area of about 4.1 hectares. The unique features of the Park is the 4.5-meter-high bronze statue of Sun Yat-sen erected in the middle of the lawn, and the decorated archway with Sun’s key political ideology in four Chinese words, “天下為公”, which means “the country/ world belongs to the public/ everyone. There is also a memorial stone with this saying on it. Besides, the ground surrounding the Statue outside the lawn carved the names of places visited by Dr. Sun worldwide. 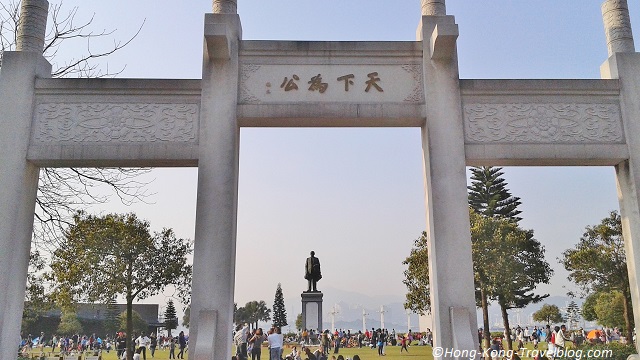 The children’s playground is modelled on educational institutions attended by Dr. Sun, including the Diocesan School and Orphanage (now Diocesan Boys’ School), the Government Central School (now Queen’s College) and the headquarters building of the University of Hong Kong (HKU). The Chime Tower in the Park used the one in HKU as a blueprint. In addition, the Park has a Four Bandits Courtyard to commemorate the contributions of the four desperados (Sun Yat-sen, Yeung Hok-ling, Chan Siu-bak and Yau Lit) to the Revolution of 1911. Four Bandits is the nickname of these revolution advocates. Other than the elements of Dr. Sun, there are many recreational facilities:

The Park is regarded as one of the most beautiful alternate waterfronts in Hong Kong by CNN. The great lawn is recommended by this website and another one even calls it an oasis. This post talks about the children’s playground there. Interested in playing causal football, read this. To learn more about Sun Yat-sen Parks in the world, check here. There are totally 106 Sun Yat-sen Parks scattered around the world!

How to get to Sun Yat Sen Memorial Park

Have you been to Sun Yat Sen Memorial Park or any other memorial parks of Dr. Sun in other countries? Please feel free to leave us comments or contact us if you have any questions.