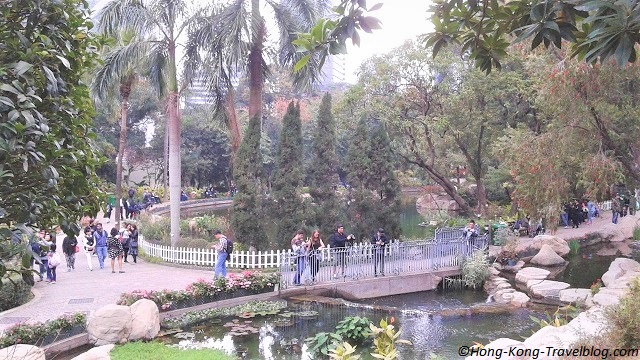 The Hong Kong Park is a large-scale public park in the Central District covering an area of 80,000 m2.  The Park blends natural landscape with modern design. It is an oasis in the central business district surrounded by the city’s signature skyscrapers.

The Park is located at the upper part of the former site of the Victoria Barracks that built in the late 19th century. The barracks were transformed into the present park at a cost of HK$398 million. It was officially opened in May 1991 by Sir David Wilson, the Governor of Hong Kong (1987 – 1992).

The Park is a great place to relax while you can feel the vitality of the city. It is suitable for all ages and is well-equipped with playgrounds, a greenhouse (Forsgate Conservatory), the Flagstaff House Museum of Tea Ware, the Hong Kong Visual Arts Centre and an aviary (Edward Youde Aviary) housing more than 600 birds representing some 90 different species.

You may not notice that flowing water has been employed as a thematic motif of the Park. There are artificial ponds with lilies, fishes and turtles, waterfalls, streams, and cliffs made from artificial rocks. If you want to have a panoramic view of the park from the top, you can climb up the Vantage Point, a 30-metre tower with 105 steps near the Tai Chi Garden.

Many trees were conserved during the transformation. You can not only enjoy the nature, but also experience the culture. Some colonial buildings are well-preserved and revitalized in different forms.

Built in the 1840s, a longtime residence of the Commander of the British forces in Hong Kong. It is one of the oldest examples of Western-style architecture remaining in Hong Kong. It was converted into the present museum in 1984 and became a Declared Monument of Hong Kong in 1989.

Originally called Cassels Block, the former married quarters for British army officers built in the early 20th century. It was turned into Hong Kong Visual Arts Centre in 1992 and became a Grade I Historic Building in 2009.

Wavell House was also the former married quarters for British army officers built in the early 20th century. It was transformed into the current centre in 1991.

Rawlinson House was built in the early 20th century as well. It was the former house of the British Deputy General and was converted into a registry and the office of the park in the 1980s.

How to go to Hong Kong Park

MTR Admiralty Station, Exit C1. Walk through the Pacific Place and follow the signs up the escalators to Hong Kong Park.

Museum of Teaware: Monday, Wednesday to Sunday: 10am – 6pm

*Free admission except the Sports Centre

Have you been to the Hong Kong Park? Which part do you like most? Please feel free to leave us comments or contact us if you have any questions.