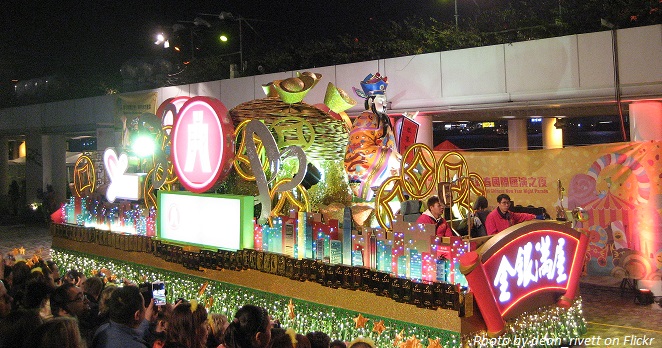 In early years, Hong Kong Lunar New Year Parade was held in East Tsim Sha Tsui in the afternoon of the New Year’s Day. Later, the venue was changed to the Tamar and North Wan Chai and then in Tsim Sha Tsui. In order to attract more tourists, the Parade has been held in the evening since 2004. Since then, lighting has been added to the floats so as to enhance the visual effect.

After years of development, Hong Kong CNY Parade has become a world-class event, in parallel with the Lunar New Year fireworks display and other events, making Hong Kong a global focus of celebration for the Chinese New Year.

The auditorium is set up at the starting point of the Parade. Visitors can buy tickets at the Hong Kong Tourism Board Advisory Centre. The ticket price is around HK$400. In addition, spectators can enjoy the Hong Kong Chinese New Year Parade on both sides of the route for free! For this reason, many people will arrive at the venue hours before the start of the Parade so as to acquire good viewing spots. If you can’t stand the crowd, no worries, the floats will be arranged for exhibition after the Parade. Sometimes, they would be displayed in Tsim Sha Tsui or at the Tamar. Last year, the floats were showcased in Lam Tsuen, Tai Po for ten days.

How to get there:

Note: Surrounding roads will be closed to vehicles about two hours before and after the parade. Please pay attention to government announcements in the local media.

To get free newsletter and updates from Hong Kong Travel Guide in your inbox, simply sign up at the right-handed sidebar. Please feel free to leave us comments or contact us if you have any questions.