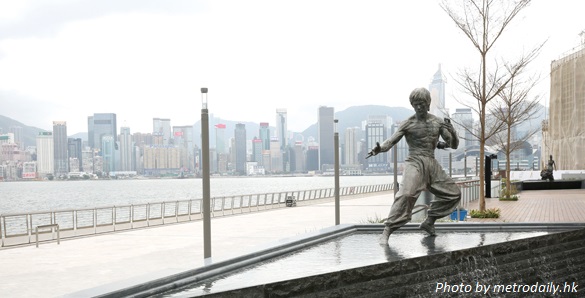 The Avenue of Stars Hong Kong (香港星光大道), part of the Tsim Sha Tsui Promenade, is located in Kowloon along the Victoria Harbour waterfront. It is one of the best places to watch the Symphony of Light daily light show.

The Avenue of Stars Hong Kong, modeled after the Hollywood Walk of Fame in California of the United States, is a special tourist attraction which pays tribute to outstanding figures of the Hong Kong film industry who helped to make Hong Kong the ‘Hollywood of the East’.

In January 2019, the avenue has been reopened to the public after three years of renovation.

Redesigned by James Corner, a famous landscape architect, together with other international and local designers, the Avenue of Stars provides visitors with a more comfortable and relaxing harbourfront with increased seating areas, as well as shaded and green areas. Environmentally friendly materials have also been used in the railings and chairs.

A number of bronze statues are erected on the Avenue of Stars such as the 6-meter tall Hong Kong Film Awards statue. The bases of the statues of Bruce Lee and Anita Mui are newly decorated with flowing-water features. Visitors can also find the handprints of Jackie Chan and handprints are arranged in chronological order.

As 2019 is the Year of the Pig, a special pig hoof print from one of the McDull statues has been added. Other than the 107 original superstars’ handprints, nine new handprints from the winners of Hong Kong Film Award for Best Actress will be introduced soon. After the revitalization, the handprints have been relocated from the ground to wooden handrails, visitors can easily enjoy a closer look at them without bending down.

Moreover, visitors can view a brief biography and film footage of the superstars by using smart phones to scan QR codes near the handprints. Visitors can also take photos with superstars’ statues through augmented reality (AR) based technology.

There are six mobile carts and one kiosk where you can find souvenirs and a variety of snacks. The nearby Victoria Dockside, previously part of the New World Centre, a new hub for art, culture and commerce, is planned to be fully opened in 2019.

Originally, it was a section of Tsim Sha Tsui Promenade which constructed in 1982 near the New World Centre. It has become a popular tourist attraction since then, especially around Christmas. In 2013, the LCSD launched the revitalization programmes of Salisbury Gardens, Hong Kong Cultural Centre, Hong Kong Space Museum and the Hong Kong Museum of Art. The New World Centre was also under redevelopment. In 2015, it was announced that LCSD and NWD would redevelop the Avenue together. During the 3-year closure, the bronze statues and some handprints were moved to Tsim Sha Tsui East Waterfront Podium Garden, which was temporally called the Garden of Stars Hong Kong.

How to get to the Avenue of Stars Hong Kong

Have you been to the Avenue of Stars Hong Kong? Are you planning to visit this world-class harbourfront landmark?

Thank you for reading this post. Feel free to leave us comments or contact us if you have any questions.