You may wonder about the official currency of Hong Kong when you are planning to visit this vibrant tiny city. Should I exchange some renminbi? Is pound sterling valid in Hong Kong? Let me clear up your confusion. We use Hong Kong Dollar in Hong Kong and have been using this term since 1863. As of 2013, it is the thirteenth most traded currency in the world. 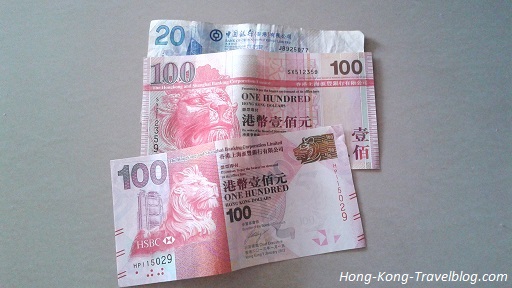 Hong Kong currency symbol and code are: $ and HKD, also abbreviated HK$. Hong Kong dollar exchange rate is about 7.8 HKD to 1 USD with slight fluctuation. It has been pegged to US dollar since 1982.

All the banknotes are issued by the three banks: HSBC, Standard Chartered Bank and the Bank of China (Hong Kong) Limited. So there are three different designs for banknotes in each denomination.

We have both coins and notes for 10 dollars. Actually, we used to have green $10 notes issued by Hong Kong and Shanghai Banking Corporation (HSBC) and Standard Chartered Bank (SCB) until the government issued $10 coins to replace them in 1993. However, the old green $10 notes remain in circulation although the banks ceased issuing them in 1993 and 1996 respectively.

If you are travelling to Macau as well, I just want to remind you that although Hong Kong coins are circulated there, but $10 coins are not welcomed by most local shops! Fortunately, Hong Kong government issued $10 notes for the first time in 2002. It has even issues polymer ten-dollar notes from 2007 onwards.

Talking about coins, you may still notice coins in circulation with the Queen’s portrait. Actually, they have been gradually replaced by those with Bauhinia flower since 1993. 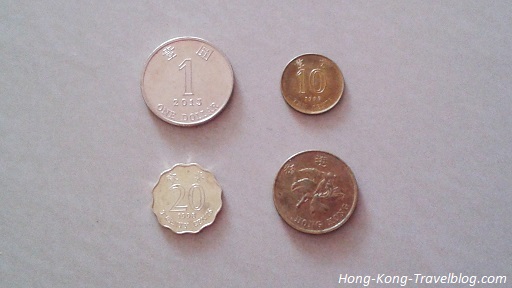 The currency of Hong Kong – the little story

There was no local currency in everyday circulation when Hong Kong was established as a free trading port in 1841. Until 1862, the British colony formally adopted a silver standard. One year later, the government issued some coins officially and they were all casted in the Royal Mint in London.

Thereafter, the Standard Chartered Bank, HSBC and the Mercantile Bank of India, London and Chinahas were allowed to issue banknotes circulating in Hong Kong in 1897, 1898 and 1911 respectively.

Hong Kong officially abandoned the silver standard in 1935. Banks in Hong Kong began to retain gold reserves, while Hong Kong dollars was pegged to British pound. This relationship did not lasted very long. The decoupling of them occurred in 1972. Since 1982, the government has adopted the linked exchange rate and pegged Hong Kong dollar to US dollar.

Thank you for reading this post and I hope that you have better understanding of the Hong Kong Currency now.

To subscribe for free newsletter and updates from Hong Kong Travel Guide in your inbox, simply sign up at the right-handed sidebar.