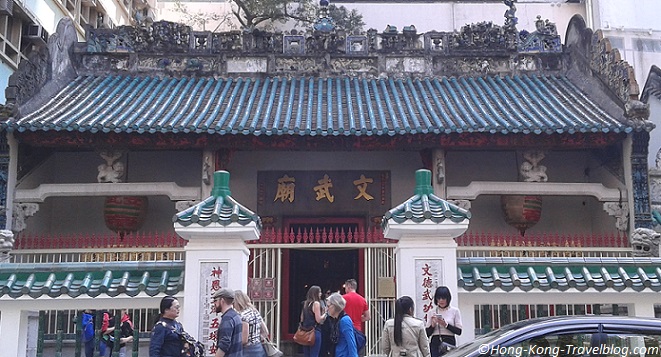 Man Mo Temple is dedicated to the Literature God (Man Tai/ Man Cheong) and the Martial God (Mo Tai/ Kwan Tai). There are a number of Man Mo Temples in Hong Kong. The most popular one is located on Hollywood Road in Sheung Wan. It is one of the oldest Chinese temple that built in the colonial period.

Man Mo Temple Sheung Wan has over 160 years of history. It is a Grade I historic building and also a Declared Monument. It was estimated to be built between 1847-1862 by wealthy Chinese businessmen.

Man Mo Temple – the statues and the worshippers

The Literature God is mostly worshiped by scholars and students, especially those who want to do well in their exams and make progress. The Martial God, who represents loyalty and power, is widely worshiped by different associations and the police. Of course, the Gods are respected by the general public. 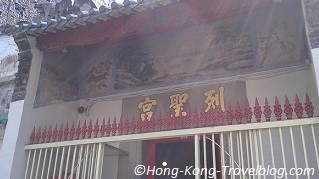 When Hong Kong was first established by the British, the legal system was not well developed. The oath that Chinese people taken in the Temple is legally binding. They used to write down the sworn statement on yellow paper, burn the paper, and then sacrifice a live chicken when they take an oath.

The Temple was formally entrusted to Tung Wah Hospital in 1908. Up to now, Tung Wah Board and community leaders still gather at the Temple every year for Autumn Sacrificial Rites in order to pay homage to Man Tai and Mo Tai as well as to invoke the prosperity of Hong Kong.

Man Mo Temple represents the traditional social organization and religious practices of the Chinese community in old Hong Kong. It is of great historical and social significance to the city.

The Temple is just a few steps away from the bustling business centre and Soho area, what a contrast! Why not pay a visit, have a look inside, and pray for health, wealth, happiness and peace under the giant hanging incense coils? 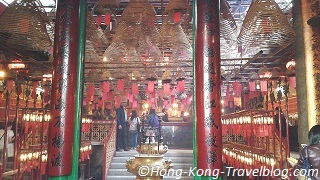 Opening hours and how to get there

Man Mo Temple Hollywood Road opens daily from 8 am to 6 pm. The admission is free.

Have you been to Man Mo Temple or any other temples in Hong Kong?