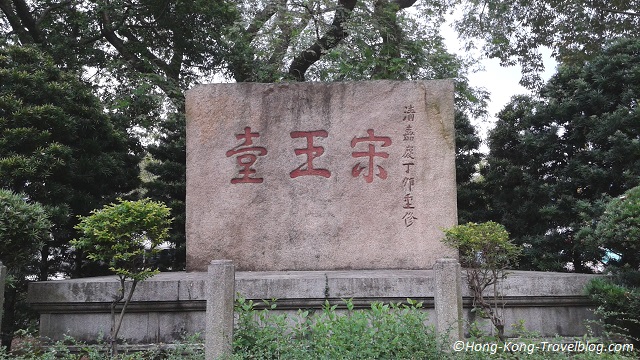 Sung Wong Toi (宋王臺) is a monument in Hong Kong, located in Sung Wong Toi Garden, Kowloon City nearby the former Kai Tak Airport. According to legend, the last two emperors of the Song Dynasty (960–1279) Emperor Duanzong of Song, Zhao Shi and Emperor Bing of Song, Zhao Bing were pursued by the army of the Mongol Empire and fled south to Hong Kong. They took refuge at the Sacred Hill (聖山) along the seashore. To commemorate this, future generations inscribed the words “Sung Wong Toi” on this large rock on top of the hill.

During the Japanese occupation of Hong Kong in 1941–1945, the large rock was destroyed in the extension of the Kai Tak Airport, and the Sacred Hill was leveled later. Fortunately, a portion of the rock inscribed with Chinese characters survived. Requested by local residents, the Hong Kong Government renovated the remnants of the rock and constructed the Sung Wong Toi Garden to place it. The garden is about 300 feet away from the original site of the Sacred Hill, which located at the junction of Sung Wong Toi Road (宋皇臺道) and Ma Tau Chung Road.

The former site of the Sacred Hill is now under construction of a new MTR station, Sung Wong Toi Station (previously named as To Kwa Wan Station), which is expected to be opened in 2019. In 2014, many relics and some ancient wells were unearthed. However, only some of them are preserved.

How to get to Sung Wong Toi

Don’t forget to visit Sung Wong Toi so as to learn more about the history of Hong Kong and pay homage to the Song Dynasty Emperors. Please feel free to leave us comments or contact us if you have any questions. Thank you for reading this post. Please like us on Facebook and share our post!