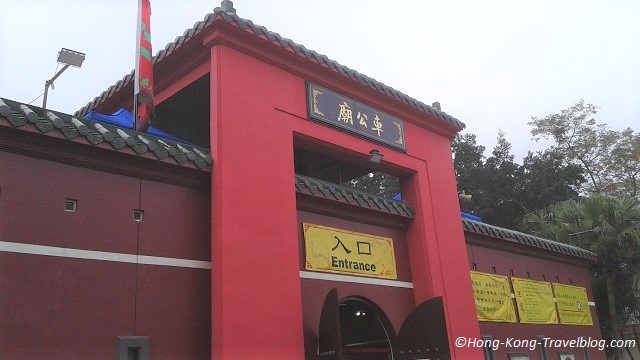 It was said that there was an outbreak of plague in the New Territories. The villagers of Shatin believed that Che Kung could protect them from the plague and flooding. Therefore, they borrowed the Statue of Che Kung from the Che Kung Temple at Sai Kung and parade through the villages in Shatin. Then, the epidemic subsided and the temple was built to worship Che Kung.

Nowadays, a giant statue of Che Kung can be found in the main hall. A drum tower, a bell tower, and fortune wheels are located at the sides of the main hall. People believe that turning the wheel can bring good fortune to them in the coming year. Fortune tellers and lucky wheels can be found at the entrance of the Temple.

Who is Che Kung

Legend has it that Che Kung (車公) or General Che was born in Nanchang of the Jiangxi Province in the Song Dynasty (AD 960-1279). He was honored by the emperor as he suppressed a rebellion in southern China. By the end of the Song Dynasty, Emperor Bing of Song escaped from the invasion of Mongolia and fled to Hong Kong. It was believed that Emperor Bing once resided in Kowloon City near Sung Wong Toi. His escort included General Che. After the death of General Che, temples were built to worship him in praise of his loyalty, uprightness and bravery.

The Birthday of Che Kung was on the 2nd day of the 1st month in the Lunar Calendar. People can celebrate Che Kung’s birthday in different seasons (including 2/1, 27/3, 6/6 and 16/8 on the Lunar calendar). The first season is the most celebrated one as it falls on the Lunar New Year holiday. People usually worship Che Kung on the 3rd Day of CNY instead of on the 2nd day which is Che Kung’s birthday. It is believed that it is easy for people to have arguments on the 3rd Day of CNY. People do not visit relatives and friend on that day and many people visit Che Kung Temple instead.

The 2020 Che Kung Festival Fair will last for eighteen days, please see the details below:

How to get to Che Kung Temple

Are you planning to visit Che Kung Temple this year? Please feel free to leave us comments or contact us if you have any questions.