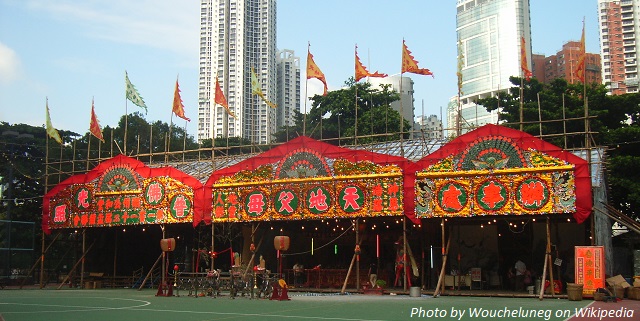 The Ghost Festival (鬼節), also known as the Hungry Ghost Festival, Yu Lan Festival (盂蘭節) or Zhongyuan Festival (中元節), is a traditional festival in many Asian countries, which is on the 15th night of the 7th lunar month (the 14th night to the majority of Hong Kong people and those in Southern China). It is about two months earlier than the Halloween. This year, the Ghost festival falls on 14 August 2019.

Originally, Zhongyuan Festival was a festival to celebrate the harvest at the beginning of autumn. People worshipped the nature and their ancestors. It was celebrated as early as the Han dynasty (206 BC–220 AD). Both Taoists and Buddhists perform ritual sacrifices during festival.

According to Chinese folk belief, the gates of Hell are opened in the whole seventh lunar month (usually in August), which allows ghosts to visit the realm of the living. Don’t confuse this festival with Ching Ming Festival (in spring) or Chung Yeung Festival (in fall) in which living descendants go tomb-sweeping. During the Ghost Festival, it works the other way round.

While many people pay tribute to their own ancestors, the highlight of the festival is that people also offer food and burn joss paper on the roadside to appease other unknown ghosts. It is believed that the wandering ghosts are those who died in accidents, did not have descendants to pay tribute to them, or did not have proper farewell rituals. Therefore, it would be so kind to make offerings to the homeless souls so that they do not disturb the living. So, if you are around during the festival and see some leftover on the roadside, don’t try to grab them as they are offerings for the ghosts. If you see someone setting up fire there, don’t be surprised as they are just burning joss paper to the ghosts. You can treat these as superstitions or traditional customs.

Nowadays, the Ghost Festival is a combination of Confucianism, Buddhism and Taoist customs. Visitors can have the opportunity to see the city’s cultural heritage in action.  In the seventh lunar month, many parks, piazzas and pitches across Hong Kong would be occupied by Yu Lan celebrations, including free rice distribution for the needy and the elderly, and Chinese opera performances in temporary bamboo theatres for the neighbourhood and the hungry ghosts. You know, they have been hungry for entertainment.  A large-scale one will be held in the Victoria Park this year. Believe it or not, the Yu Lan Ghost Festival of the Hong Kong Chiu Chow Community, is officially listed as part of China’s intangible cultural heritage.

Have you got any thought about the Hungry Ghost Festival? Please feel free to leave us comments or contact us if you have any questions.