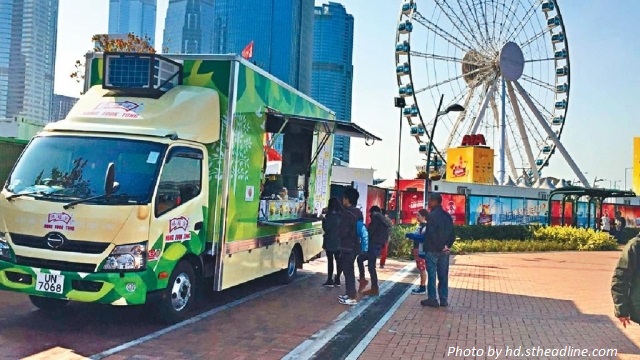 The long-awaited Hong Kong food trucks have been rolled out after Chinese New Year Holidays 2017. Some of the food truck Hong Kong winners have started to operate at popular tourist attractions across Hong Kong since early February, while the rest of them would be launched in March. Hungry for specialty gourmet food like Lo Mein, crispy Pineapple Bun, BBQ meat sandwich, super grilled squid, new-style dessert and more, let’s have a look!

Hong Kong is a world-renowned gourmet paradise. However, there were no food trucks on the street except ice cream vans. Considering the vanishing of Hong Kong street food hawkers since the government banned new licenses in the 1970s, the former Financial Secretary Mr Tsang Chun-wah, who was inspired by a Hollywood movie, proposed to introduce food trucks to Hong Kong in February 2015. The Tourism Commission then launched the two-year Food Truck Pilot Scheme. A total of 192 applications were received in mid-2016. Fifty-one candidates were invited to participate in the preliminary selection, and they later presented their signature dishes at a cook-off challenge. Sixteen suitable operators were selected by a panel of representatives from relevant government departments, members of the tourist industry and food experts etc.

The 16 food trucks operate on a rotating basis, each of them will station at one of the eight locations for two weeks. Visitor signboards with the food truck logo have been built along the way so that foodies wouldn’t get lost. If you pass by the locations, don’t forget to grab something nice and fresh to fill your stomach. Beware that there may be long queues in front of the food trucks. To track when and where to find each truck, you may need to use a companion app, HK Food Truck. As the operating time of different food trucks varies, around 10 a.m. to 7 p.m. daily, it would be better to check the app.

Among the 16 food vans Hong Kong, some of them are start-up micro-enterprises, while some are the affiliates of large enterprises. A fusion of Chinese cuisines, Western dishes and international gourmet ranged from around HKD 20 to 80 (USD 2.5 – 10) are offered.

For pictures of each signature dish of the 16 food trucks, you may want to visit this website.

Some people contend that the food is not representative enough as fish balls, siu mai or beef offal are off the menu. Others argue that the cost of operating a food truck is still too high for traditional local street food hawkers. While the government-initiated food truck pilot scheme is still controversial, Hong Kong certainly needs to make space for the development and the inheritance of local food and culture. What do you think? Which Hong Kong Food Trucks do you like most? Please feel free to leave us comments or contact us if you have any questions.