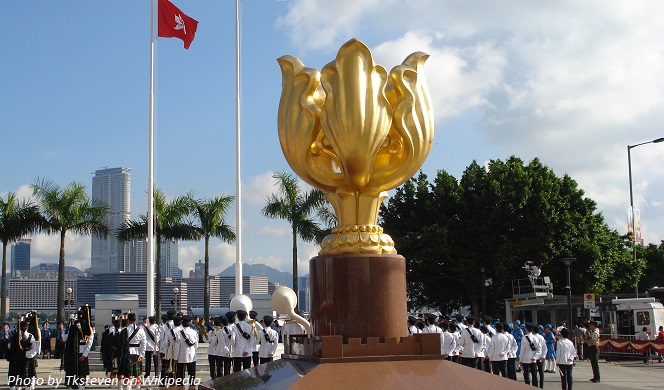 The Golden Bauhinia Square is located in Wan Chai, right outside Hong Kong Convention and Exhibition Centre (HKCEC) Extension. It is close to Wan Chai Temporary Promenade and facing Victoria Harbour. At the centre of the square, there is a giant statue of a golden Bauhinia blakeana. It is one of the tourist attractions in Hong Kong, particularly on the days with firework shows over the harbour, which are the second day of Chinese New Year, the National Day of the People’s Republic of China, and Hong Kong SAR Establishment Day.

You may have heard that Bauhinia blakeana, also known as Hong Kong Orchid Tree, is the city flower of Hong Kong. The conspicuous purplish red flower has officially become Hong Kong’s floral emblem since 1965. While the flower was believed to be first discovered in Pokfulam, Hong Kong Island by a priest from the French Mission in 1880, Bauhinia ‘blakeana’ is named after a plant lover, Sir Henry Arthur BLAKE, the 12th Governor of Hong Kong (1898-1903).

Let’s get back to the Golden Bauhinia Square Hong Kong. Actually, the golden Bauhinia blakeana statue was given by the Central Government to Hong Kong Government as a present to celebrate the transfer of sovereignty of Hong Kong. The gilded flower sculpture, named “Forever Blooming Bauhinia”, symbolizes Hong Kong’s prosperity thereafter. The bronze casting sculpture is six-meter tall and weighs 70 tons, with a red granite base. On July 1, 1997, Hong Kong Chief Executive, Tung Chee Hwa and the Vice Premier, Qian Qichen presided over the opening ceremony of the square. Since then, it has become a popular tourist attraction, especially for visitors from Mainland China.

The daily flag raising ceremony at the Golden Bauhinia Square Wan Chai is conducted by Hong Kong police officers in ceremonial uniform and includes the playing of the national anthem. The differences in the enhanced ceremony are: police officers are accompanied by a rifle unit in formal attire, the playing of the national anthem by the Police Band, and a 10-minute musical performance by the Police Pipe Band. On the second Sunday of each month, the flag raising ceremony is conducted by different local youth uniformed groups without a band performance.

How to get to Golden Bauhinia Square Hong Kong

If you want to approach the Victoria Harbour, watch a Symphony of Lights or firework shows, or even go to the HKCEC by any chance, you may drop by the Golden Bauhinia Square.