To celebrate the Olympic Games Rio 2016, it’s time to show you Hong Kong attractions related to the Olympics. You may have passed by the Olympic Station on the Tung Chung Line of Hong Kong’s MTR when you travel from Hong Kong International Airport to the city centre by railway. Actually, there are some exhilarating stories behind.

A sculpture resembling windsurfing was erected near the beachfront at Tung Wan Beach, Cheung Chau in September 1996 in honour of Lee Lai Shan, Hong Kong Olympic gold medalist in windsurfing, and to promote windsurfing in Hong Kong. Cheung Chau was her birthplace and where she started practicing windsurfing at the age of 12 under the guidance of her uncle. Lee won many international competitions over the years. She was the only athlete to win an Olympic medal representing British Hong Kong. Near to the sculpture at Kwun Yam Beach, you can find the Cheung Chau Windsurfing Center where you can enjoy some water sports and afternoon teas.

How to get to Cheung Chau:

Take a ferry from Central Pier 5 to Cheung Chau. At Cheung Chau Ferry Pier, walk along Tung Wan Road for 10-15 minutes to reach Tung Wan Beach. To reach Kwun Yam Beach, turn right and walk for around another ten minutes in the direction of Warwick Hotel. 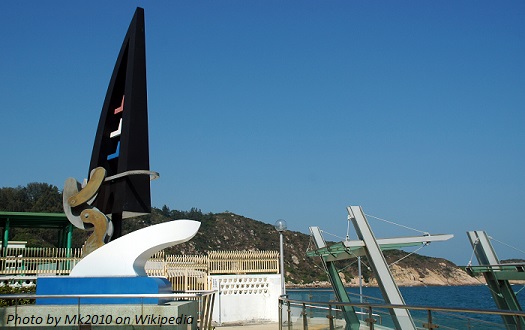 The 2008 Olympic Games were held at Beijing, China with the equestrian events held at Hong Kong from 9th to 21st August 2008 in the New Territories. In the same year, the first-ever equestrian team from Hong Kong participate in the Olympic Games and competed in the show jumping events at the Games.

Olympic Equestrian Venues for the Olympic and Paralympic Games equestrian events and supporting facilities were built by The Hong Kong Jockey Club, including the modification of the Hong Kong Sports Institute and Penfold Park to provide an Olympic complex, main competition arenas, and training arena so as to accommodate the Dressage and Jumping events. Additionally, the cross-country section of the Eventing competition was held at the Hong Kong Golf Club and the Beas River Country Club. The Olympic facilities were demolished after the completion of the Games and restored back to their original uses. However, you can still visit Penfold Park, a public park located in the centre of the Sha Tin Racecourse featuring Olympic Mega Rings and Hong Kong Olympic Cauldron.

How to get to Penfold Park:

Let’s get back to the city. Olympian City is a shopping and residential complex in West Kowloon, next to the MTR Olympic Station. It is home to around 250 shops including international fashion, beauty, health care, accessories, homewares, wellness and more. Also, there are around 40 restaurants and a footbridge at Phase III linking it up with the heart of Kowloon, Mongkok. There were three phases in the development of the Olympian City. Phase I were completed from 1998 to 2000, Phase II were completed from 2000 to 2002, and Phase III were completed in 2011. Various types of art exhibitions, cultural activities and performances are often held here. Additionally, there is a small park on the podium near to Phase II called Olympian Park.

How to get to Olympian City: MTR Olympic Station, Exit D

The square is designed for holding events like sports promotion, outdoor exhibitions, puppet shows, concerts and other entertainment events. It is also a good place for leisure. The 1,100 m2 Olympic Square has a seating capacity for 880 people.

How to get to Olympic Square at Hong Kong Park: MTR Admiralty Station C1 exit