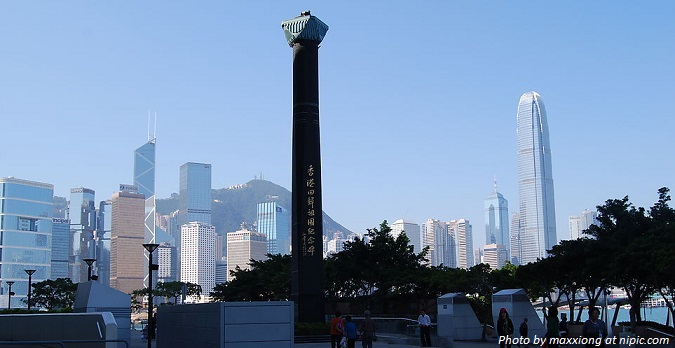 Hong Kong Handover Monument, also known as the Monument to the Return of Hong Kong to China, is a column located in Wan Chai, next to the Golden Bauhinia Square and Hong Kong Convention and Exhibition Centre (HKCEC) Extension, facing Victoria Harbour. The Monument was unveiled on July 1, 1999, by Hu Jintao, the Vice-President of China and Tung Chee-hwa, Hong Kong Chief Executive, to mark the second anniversary of Hong Kong’s return.

The Monument is 20 meters tall and 1.6 meters wide, composing of three parts, the base, the body of the pillar and the capital. The base and the body are made up of granite while the capital is in bronze. There are 206 stone rings on the body of the pillar, representing 206 years from 1842 to 2047. Among them, there are six stone rings with lighter color which represent important years in the history of Hong Kong, including:

1842: Britain and the Qing dynasty of China signed the “Treaty of Nanking”; ceded Hong Kong Island

1860: Britain and the Qing dynasty of China signed the “Beijing Treaty”; ceded Kowloon

1898: Britain and the Qing dynasty of China signed the “Convention for the Extension of Hong Kong Territory”; leased the New Territories

1982: Britain and the People’s Republic of China talked about the future of Hong Kong

To highlight the importance of Hong Kong’s return, the stone ring of the following year is fitted with a halo containing thirty -two fiber points:

The last stone ring marks the year 2047 which represents Hong Kong remaining unchanged for 50 years. The top of the monument set up 4,000 watts of powerful spotlights which light up the sky at night and symbolize of Hong Kong’s continuous prosperity.

If you visit the HKCEC and the Golden Bauhinia Square by any chance, you may have a look at one of the attractions in Wan Chai, the Monument to the Return of Hong Kong to China.